Geography and How it has Shaped a Culture

The Samoan people live in an area that consist of two main islands and several smaller islands. This group of islands is located in the Pacific Ocean between New Zealand and Hawaii. The climate is tropical and average temperature is around 30°C. The terrain is consistent with most other Pacific Islands and is made up of volcanic mountains and uninhabited islets with sandy beaches. The majority of Samoan people live in a rural setting. Their environment consists mostly of tropical plants with the fauna consisting of a few species of rats and flying foxes and more commonly reptiles such as snakes, lizards, and geckos. The main source of food for the reptiles is a diverse and abundant population of insects. The insects also feed the great number of birds the island plays host to. The most prominent environmental stressors of the area are the cyclones and typhoons as well as less frequent tsunamis. 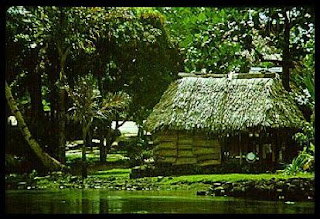 Genetic adaptations of the Samoa include what has been termed the “thrifty” gene which is beneficial for the seafaring Samoans as well as enabling survival during times when crops were destroyed by seasonal storms. The Samoans also have darker skin pigmentation to help cope with the increased exposure to the Sun. One of the cultural adaptations of the Samoa was their housing called fale which are made of coral cobblestone floors and sugarcane thatched roofs both an abundant resource. The open air fale are well adapted to the tropical environment by allowing air to flow through as well as supporting the open social structure of the Samoa. Another cultural adaptation of the Samoa is the large families. This aids in working the land used for farming which is similar to other farming families of the world. Clothing may also be considered an adaptation and the Samoa traditionally wore siapo. The cloth was made from the bark of a mulberry tree. The long and tedious process of making the bark into cloth involves many hours of pounding and scraping of the bark which is then typically colored with intricate patterns. Samoans also traditionally use siapo as sleeping mats and room dividers.


Communication and Gender Roles
The language spoken is Samoan which is of the Austronesian linguistic family. Besides their native language most Samoans also speak English. They share many words with other Polynesian cultures and also have two forms one formal and one informal. Prior to their encounter with missionaries the Samoans had no written form of language. History and land rites were communicated verbally and were passed down from generation to generation.

The men of traditional Samoa worked from dusk till dawn working in the plantations, gathering firewood, fishing, or building the fales. In the Samoan culture it is also the man’s job to cook. The women’s general duties tend to be the domestic work around the fale such as sewing, weaving floor, and laundry. Women are also skilled shallow water fishermen and foragers. Typically older girls are responsible for the care of children and boys generally start work once old enough to accompany the men of the family in the fields or on the fishing boats. There is also a third gender known as the fa’afafini. The male born fa’afafini is a celebrated addition to Samoan families, as they perform domestic task as women. Presently roles are interchangeable and there does not seem to be any repercussions for a gender performing another’s role.


Provisions and the Economy 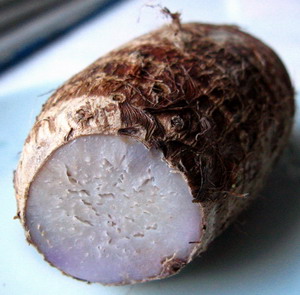 Samoan subsistence is farming and fishing. The diet of coconut, taro, and other produce is subsidized with protein from fish. Because of the minimal variation in climate throughout the year there tends to be little variation in diet. It has been noted that at times a lack of protein has caused distended stomachs in children due to the eating order of the culture. Taro was once one of the main exports. However, in 1994 there was a taro plant blight that nearly wiped out the main export. The main export now is coconut products. Taro that is grown locally is now mostly eaten locally and is typically made by boiling it in water. The Samoa also raise chickens and pigs for food, but pigs are generally only eaten on special occasions. With the growing population and limited resources the Samoa have developed an import/export deficit. They also have a tradition of emigrates in other countries sending money back to their families (remittance).

Marriage among Samoans are monogamous and are only restricted to people of non-blood relation. Traditionally marriage was an economic alliance between families. A fa’alavelaves is charged to the families involved in the wedding and even distant families that live in other countries will help with the wedding cost. The bride is also presented with several wedding dress options from both the bride and grooms family. From which she is to select two. One of the dresses is to be worn during the ceremony the second is to worn to the reception. In the past the offspring of chiefs would have grand ceremonies and poorer couples would elope. A tradition that seems to have become obsolete is the test to prove the bride’s virginity. Where thea women of the grooms family would look for blood on white sheets where the bride and groom had intercourse. Once married the couple lives together along with other family members in the open air fale. A household generally consist of one or more nuclear families and involves multiple generations. A household is generally governed by a matia which is typically a male. Lineage is usually traced back to a common ancestor and descendants can be found in different households within a village or several villages. This extended family traced through the ancestor is known as the Aiga.

Samoa’s politics on the country basis involve a governor and a lieutenant governor. These positions are elected by popular vote. Villages are controlled by fono-the council of matia which are selected by service performed for the family, education, speaking skills (an extremely important attribute in Samoan culture), diplomacy, and economic success. 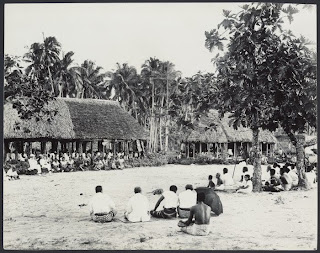 Laws are enforced by fono and in present times also a small police force. Western type laws have been adopted in present times. It has been determined that  many more police would be needed if not for the fono. Punishments imposed can range from monetary to payments with foodstuffs and more uncommonly banishment. These punishments can also be imposed on the innocent family members of the violator.
The Christian religion has been adopted by Samoa. It is thought that because        Christianity’s one God as the creator parallel’s Samoa’s Tagaloa as the creator made the transition a smooth one. Samoans are vigilant in their attendance to church. They have also been known to give great offerings for dedications of new churches. Their religious beliefs are a main staple of their laws and in general their culture. 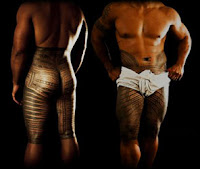 Art in Samoa is includes one of my favorites which is the tattoo. Traditional Samoan tattoos often take many weeks and are extrememly painful. The tattoos that men receive are typically filled in to a greater degree and are more of a ritual. They use patterns that symbolize different aspects of nature such as plants, animals or sea life. Men often considered the tattoo as an actual piece of clothing and early sailor described them as “britches”.This being that the tattoo typically covered the lower torso down past the upper thigh-completely! Another form of art in Samoan culture is dance. 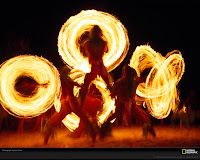 During these dances everyday activities are often imitated. There are also the exciting fire dance and knife dance. Musical instruments of the Samoa were of primitive design. The rolled up mat was one such instrument. They also often used the flat-hand clap (pati), the cupped-hand clap (fiti), and body slapping accompanied by singing or other forms of vocalization.

Samoan culture has definitely been affected by other cultures. I would have to say that foreigners visiting the islands is actually part of thier culture because it has been an occurence for so long. One of the laws that makes it to where a person has to have at least fifty percent Samoan heritage is a great step in preserving this culture.The main affect of other cultures I would have to say is the christian  religion. This has religion has resonated through time and also through other cultures.
Although the Samoan culture is undergoing many changes it is also aware of the need to preserve their heritage. One problem is the new lifestyle of Samoans is so sedentary that is has created an Obese society. This is being seen in many other modernized cultures, but due to the "thrifty" gene Samoans have seen it on a larger scale.

Posted by Steven Fulton at 7:25 PM